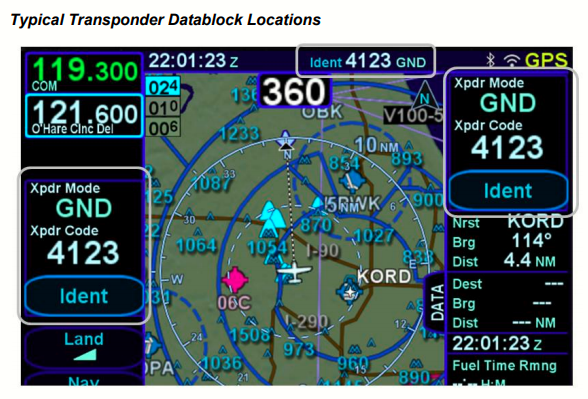 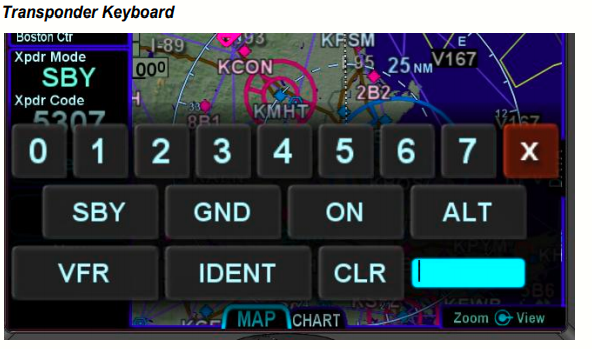 To enter a transponder code using a keyboard, touch a transponder mode/code data blocks to display a transponder keyboard, then enter the code. The new code is set after the fourth digit is entered. If an incorrect digit is entered, press the CLR button as required to backspace through the code. If the code entry is started, three seconds of inactivity will cause the keyboard to be dismissed and the original code will be restored. Transponder code can also be entered using the lower left knob. First, press the knob until the transponder tuning data is displayed in the upper left corner of the display. Then rotate the knob until the desired code is shown. The outer knob adjusts the first two digits and the inner knob adjusts the second two digits. During entry, the code will be highlighted. The new code will be set once the highlighting is removed.

Some aircraft installations include a ground/air state input, such as a gear squat switch or discrete input from an IFD. In those installations, the IFD will automatically select GND on landing or while taxiing and will automatically select ALT when airborne. Pilot selectable states will be limited to ALT-ON-SBY when in-air and GND-SBY when on-ground. When airborne, the transponder should always be set to ALT unless otherwise directed by Air Traffic Control. VFR To quickly set the regional VFR code, press the VFR key. To return to the previous code, press the VFR key again. The regional VFR code can be set using the User Options under AUX-SETUP. IDENT To perform an IDENT function, press the IDENT key. The “Ident” in transponder data blocks will be highlighted in green while the transponder is transmitting the Ident pulse. If a transponder data block contains an "Ident" soft LSK, touching the soft LSK will activate the transponder IDENT function. Keyboard Dismissal The keyboard will be dismissed through one of several methods:  Touching one of the Mode soft keys  Touching the IDENT soft key  Touching the red-X in the top right corner of the keyboard  Ten seconds of inactivity